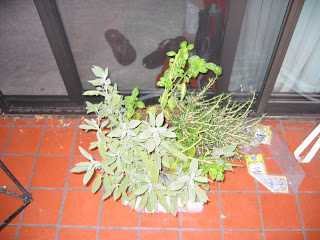 All quiet on the tomato front this week, so today we are bringing you news from the world of basil.* My plant (pictured, with sage and rosemary) had been getting somewhat overgrown, to the point that I had to trim off the flowers that were sprouting, which was a little sad, because they smelled nice and I couldn’t think of what to do with them. But I’d read you aren’t supposed to let your basil bolt, and since I couldn’t figure out how to get a harness on it I figured this was going to be the best way.

I really like having my own herb garden– it’s nice to be able to just step out onto the balcony when you want something, instead of paying a ridiculous amount for it at the store and having most of it go bad in the fridge. But, for once, I seem to have found something I am better at growing than I am at eating, and we’ve been suffering from something of a surfeit.

Which is why it was nice last night, when I went to dinner at my parents’ and they were planning on having pasta with pesto** and didn’t have any basil on hand. So I took a pair of scissors to my overgrown little plant, and we had the first meal ever that had as a major ingredient something produced in my garden. Which I thought was pretty cool, and also tasty.

*Not Basil.
**Or, as it was known to me as a child, “green spaghetti.” As opposed to “red spaghetti.” It wasn’t until much later in life that I realized that not everyone thought of pasta as coming in those two basic options. Also, mixed greens were “funny lettuce.”