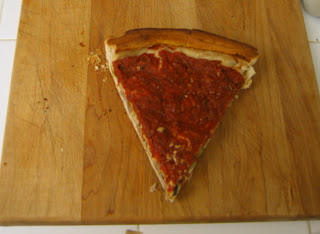 It was Cameron’s birthday this week (Happy birthday!), and it was up to me to come up with a special dinner for him. Since it was on a Monday, the restaurant options were going to be limited, so that left me with home cooking. Until I saw this, the website for an actual Chicago pizza joint in actual Chicago that will ship pre-cooked pizzas anywhere in the country. Cameron has a well-documented love of the pizzas of that city and it occurred to me that this, along with a couple of Arrogant Bastards, would be just about the perfect birthday dinner.

I ordered it to arrive last Friday, because they wouldn’t ship to arrive on Monday, and it came by FedEx overnight on dry ice. I had it sent to work, because I wanted it to be a surprise, which meant I had to explain to the person in receiving why she had to sign for a pizza. Fortunately, she had a brother in Chicago and she could vouch for the restaurant, which was a relief. So I popped it in the freezer for the weekend and hoped no one would mind I was taking up so much space from the frozen lunches.

I have to admit, I am generally dubious about claims of regional pizza superiority. I am a life-long fan of Zachary’s and there are some very fine modern-type thin crusts available in the city. But I have to admit that this was some damn fine pizza– probably some of the best I’ve ever had, despite the fact that I hadn’t quite warmed it up sufficiently, due to fears of burning. I’d ordered the “Windy City Special” (because that seemed like the thing to do), which came with sausage, mushrooms, green peppers, onions and pepperoni, and I didn’t pick off peppers, like I usually do, because it was all so good. And the best news is, Cameron liked it just as much, if not more, which is really what it was all about.

2 thoughts on “Thurscheese: The Well-Traveled Pizza”