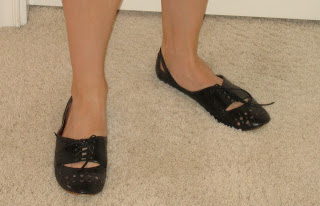 Every once in a while I suffer from a form of temporary insanity that makes me believe I am a hip young person, and I attempt to dress accordingly. Fortunately, this has yet to manifest itself in the form of rompers or harem pants, but it has affected a few of my shoe purchases.

These are my entry into the “oxford” trend that has been going on for a few seasons now. I like them because they aren’t too literal about it, because at the very least I am aware that I am not a waifish hipster* chick who can walk around in actual men’s shoes without looking like she’s cross-dressing. But I will admit that they are slightly too long for my feet, and thanks to the cutouts you can see where my toes end and the shoes keep going.

Not that that stops me from wearing them. Or, more to the point, from deeply desiring an example of the next iteration of the trend, the high-heeled oxford. Specifically, these, which I have developed a minor obsession with. I mean, since when has Timberland made cute shoes? But I can totally see wearing these with tights in the winter.

But then, that might just be my trend-susceptibility talking.

*For those who missed it in my twitter feed, my hipster joke:
How many hipsters does it take to screw in a lightbulb?
It’s a really obscure number; you’ve probably never heard of it.