If you were to see me today, you might notice that something is a little odd. “Why is she walking like a brain-damaged penguin?” You might wonder. If you had some free time, you might even ask me, “Hey, what’s wrong with you? Did you lose a fight with a thigh-high bulldozer? Is it even possible to win that fight?”

“Actually,” I would say, “I ran a half marathon yesterday. Do you want to hear about it?”

“I’ll take it from the beginning,” I would go on.

5:30 am: Alarm goes off. Briefly consider throwing it across the room, but decide against because it’s also my iPod. Stagger out of bed wondering why I ever thought this was a good idea. Dress in the running clothes I had laid out the night before (magenta quick-dry shirt, gray cullotes w/ yellow knee ties, plain but functional sneakers, blister-preventing socks, clips to keep my hair out of my eyes). Figured out (with help from Cameron) how to use the “lap” function on my watch. Ate a granola bar, drank some sports beverage. Wondered who I was and what I had done with Daisy.

5:52 am: Relayed the critical information that I was about to run a half-marathon via Facebook and Twitter.

6:15 am: Left for San Jose. We knew the way, and besides, the freeway signs are well-marked. I don’t know what the big deal is about that.

7ish: Parked at HP Pavilion. Marveled at the percentage of females in the crowd. Apparently, if you think you never see women in the South Bay it’s because they’re all out distance-running. Walked over to the start area, decided to use the porta-potties before they got too nasty. Checked in gear, stretched, did a warm-up jog, realized we needed to use the porta-potties again. They had gotten nasty.

7:55 am: Ate a packet of mint chocolate gu. Not entirely disgusting. Said temporary goodbye to Cameron as we split off into our respective start groups. 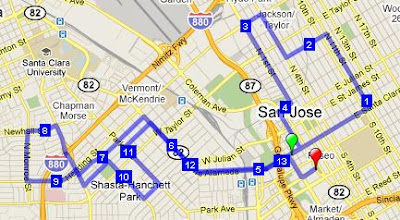 Mile 1: Started strong, once the crowd spread out enough to allow running. Had forgotten how to set “shuffle” on my iPod, so played my exercise mix alphabetically. First up: Alien Ant Farm’s cover of Smooth Criminal.

Mile 2: At the first mile marker, realized that I was going way too fast, and I was never going to be able to sustain this speed for the entire race. Forced myself to slow down, despite the fact that this meant I was being passed by pretty much everyone, including a woman in a pink tutu, several elderly people and a guy pushing a two-year-old in a stroller. Music: transitioning from Basement Jaxx to Black Eyed Peas.

Mile 3: Turns out San Jose has a Japantown. Who knew?  Still working my way through the BEP set here as we hit the first water station and I almost slip on the discarded cups.

Mile 4: Still feeling pretty good, still getting passed pretty steadily. Passed through San Pedro Square, which seems to be a place that has restaurants, and people who like to hang out in it early in the morning and watch other people run. Whatever makes you happy, I say.

Mile 5: Black Eyed Peas series ends with Pump It, causing me to put on a burst of speed and pass the people I had been running with for the last couple of miles. This may or may not prove to be a good idea, but it does gain me some time on the course.

Mile 6: I get my first indication that I am doing better than my previous time when the first of the elite runners passes me here, later than they did two years ago. And it really is just the first– he goes by, and then several minutes pass before anyone else appears. I make it to where the returning runners split off before I see any of the elite women, which is simultaneously disappointing and encouraging.

Mile 7: All of the water stations– and there are plenty of them– seemed to be staffed exclusively by Asian kids. Seriously, I don’t know where they found all of them. And they were all very enthusiastic, like they were very excited to be standing out on the street for a couple hours handing small cups of water and energy drink to strangers who then spill it all over their faces. (The runners’ faces, not the water kids.) I felt kind of bad running past them when I’d already gotten my drink; like I was being rude to ignore them. Right about now is where I started on the music from the Daft Punk live album, which would carry me for the next few miles.

Mile 8: We were well into a residential area, one with some impressively large houses. Pass a pair of little girls who have set up something akin to a lemonade stand, with pump bottles of Italian syrup and possibly shaved ice. The old guy next to me comments that this looks like a good business idea, and I point out that it would be if anybody was carrying any money. He suggests that they should take PayPal, and passes me. My speed is starting to slack off unintentionally– Where before I was doing more like a nine-minute mile, now it’s sneaking up over ten.

Mile 9: This is the point where I was just about ready to call it a day. I mean, running is cool and all, but after about eight miles I find I’d rather be doing something else, like sitting.

Mile 10: Things are starting to blur together here. Still well into my Daft Punk soundtrack, pretending that the crowd noise is cheering for me. This helps, sort of, briefly.

Mile 11: Slogging along through what seems to be a lovely, if rather conventional upscale residential neighborhood when a giant, whitewash Egyptian temple, complete with Sphixes appears to my right. As it turns out, this is an actual museum, and not a fatigue-induced hallucination, which I suppose is comforting.

Mile 12: Seriously losing speed at this point. Now, when I pass a water station I not only walk while I’m drinking, but for a little while after, and it’s getting harder and harder to start running again. My goal of finishing in under 2:10 is starting to look distant, and I’m refocusing on finishing in under 2:20.

Mile 13: Home stretch! Just seeing that 12 mile sign gives me a boost of energy I didn’t know I still had. I skip ahead by several letters to Kevin Rudolf, my go-to singer for guitar-heavy workout music, and between them the energy was enough to push my speed from “non-existent” to “negligible.” And it worked for a while, but by the time I turned the corner on the final straight stretch, desperate measures were called for.

That’s when I turned to the most ridiculously, cheesetasticly awesome song in my whole mix. Ladies and gentlemen, Let It Rock:

4 thoughts on “A Day at the Races”