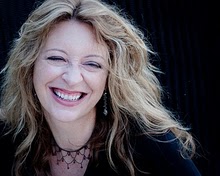 Today we have our first repeat visitor to the Shoefinder world, and this time we are going Beyond Shoes*. Sophie Littlefield, cross-genre author extraordinaire, has a new YA book coming out and we are going to help her develop a look to go with it. 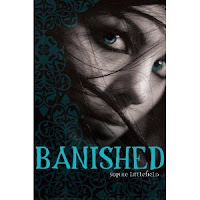 The book is called Banished and is about, according to the description,** a sixteen-year-old named Hailey Tarbell, whose only aspiration is to get the hell out of her dead-end Missouri town until she discovers that she has awesome and scary healing powers, which make her a person of interest to people who may or may not be interesting, but definitely have guns. (I’m paraphrasing here.) Also, I have it on good authority that there may be zombies.

So you can see the styling issue here. On the one hand, this isn’t the sort of thing where you can show up at a signing in a floral twinset and eyelet skirt; but  you don’t want look like you went all supermarket-spree on a Hot Topic either. I think the look to go for here is kind of “upscale goth”– ideally to look like the kind of person the be-eyelinered and parasol-carrying gothlings can look at and aspire to be when they grow up.

Disclaimer: I don’t mean to imply that all of these items are to be worn together. That would be a little much, in terms of look. Plus, you would be wearing two pairs of shoes. 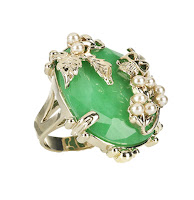 First, the jewelry. It’s tempting to go full-on skull ring, but that’s a little obvious, don’t you think? Not that I have anything against a skull, I just like it better when it’s done with some wit, like in something like this.*** Or, even better, this one, which is really quite beautiful, and it’s only when you get up close that you notice the skull in the detail. 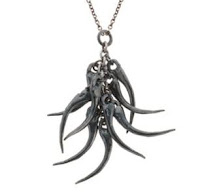 [fang necklace]Another unexpected touch? A fang necklace in oxidized silver. And don’t tell anyone I told you this, but I’m pretty sure I’ve seen it come up for cheaper on Gilt Groupe. 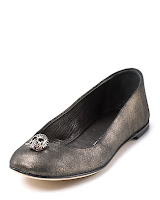 And yes, I realize I may be overdoing it a bit on the skulls thing (you aren’t supposed to wear these together, remember?) But I just have to include these, because they’re just that amazing. He has a rose between his teeth! They’re on sale until Monday! What more could you possibly ask for?

Well, okay, maybe you could ask for some crazy over-the-knee, lace-up-the-back boots. But that’s really it. 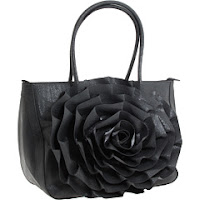 And while we’re on the subject of accessories, let’s talk purses. I like the of something in a snake print here, and I have to admit that I am kind of taken with this one, despite the fact that it’s a completely obvious rip-off of the Valentino version, which was apparently itself ripped off from a YSL design from ’03. Also, it would get completely squished in the car, and probably be really uncomfortable to carry under your arm, but I try not to let my self be restrained by reality here.

On that note, how about a leather dress? Yeah, cost, cleaning, breatheability, whatever. I’ve just got one question for you: Is it awesome?

Yeah, I thought so.

But I’ve got something even more awesome here: 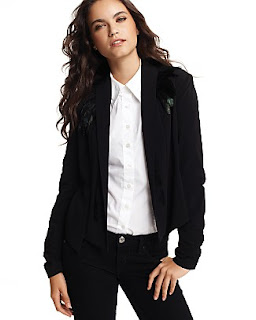 That’s right, it’s a jacket with feathers on the shoulders. Feathers! Could anything possibly be more high-end gothness than that? Plus, unlike fur, you’re very unlikely to have people throwing red paint on you, which is a good thing, because that can really ruin a look.

So, what do you guys think? Any suggestions?

*Which is kind of like being Beyond Thunderdome, only without the awesome Tina Turner song.
**Which I refer to because it will not, technically, be published until Tuesday.
***Extra creepiness points for being from the skull-heavy collection he designed before he died.