Because it was a great location, but I have to say, that hotel room was not cheap. 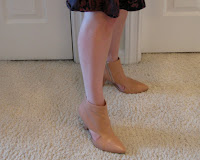 One problem with my shoe-centric convention plan was that it was kind of incompatible with pants. Which is too bad, because I’m a big fan of pants. But these are the kinds of sacrifices we have to make if we are going to go around using our material possessions in our desperate bids for attention. Which is a long way of saying I spent a lot of time in skirts, with a heavy reliance on pieces from the last Target designer collection.*

I tried to wear my cut-out booties to Cornelia’s panel (“Nancy Drew Was a Cosmo Girl”***), but it was so crowded I would have had to spend the entire time crouching on the floor. So I took myself off to the Sisters in Crime-hosted hospitality suite, for some of the generously provided snacks (best acquired when panels were in session,  due to the lack of competition).

Besides, I needed the sustenance for the next panel I attended (and got an actual chair! kind of had to fight for it though), on Ancient Greek and Roman-set mysteries, featuring every heavyweight**** best-selling author in the genre, plus Gary Corby, my twitter pal and a debut author, holding down the Greek end of things. I’d have to say it was the best panel of the convention, as measured in the number of wacko stalkers who turned up during the Q&A period (two).

By the way, I feel like I should mention that while all this was going on, it was also my thirty-third birthday. I am now firm in my belief that all birthdays should be celebrated in the company of 1400 mystery authors and fans. Also, Cameron gave me a mini video camera, and as soon as I figure out how to work iMovie it’s going to be all cat videos, all the time around here. You have been warned.

After lunch, a nap, and a change of shoes, it was back into the fray, as represented by going to the Craft Room session run by Camille Minichino (aka Margaret Grace), where we learned about making miniatures. Mine was a basket with books, bottles of Coke, and gin (someone else got the rum). I thought I was doing pretty well, in terms of impressing the people at my table, handing out my tiny business cards, but I definitely lost out to the woman who was ghost-writing the autobiography of a high-class hooker.

That evening, Lee Child– mega-bestselling author of the Jack Reacher series– showed us all that he was not only way more successful than any of us would ever be, but also a stand-up guy by buying drinks for the entire convention. I wore my crocodile de la Renta platforms, which seemed appropriate, though Sophie’s agent Barbara declared herself unimpressed. Around the same time, Sophie discovered it was my birthday, and demanded that everyone sing. Fortunately, she only got one taker, a Mr. Brad Parks, fresh off of winning the Shamus Award for best first novel and possibly in an unusually good mood, who broke into a lovely rendition of “The Way You Look Tonight.”

I you had asked, as Cameron was helping me stagger up to our new, non-smoke-infested room, I would have had to reply that, like the man said, it was a good day.

*It is a truth universally acknowledged that a woman possessed of expensive shoes can make cheap clothes look fancier than they are. A good purse helps too.**
**Actually, though, I went functional in my bag choice, with a tote made from a recycled Korean advertising banner.
***Which I can’t really argue with because I find both Nancy Drew and Cosmo kind of insipid, though I don’t think that was the perspective they were going for. It was never clear exactly why Cornelia ended up on that panel.
****In sales and stature, not physical size.