Is there anyone who doesn’t like the Trader Joe’s Fearless Flyer? It’s so counter-intuitive. I mean, when you think about supermarket flyers it’s all big pictures and bright colors; sale prices in 32-point font and no concepts more complicated than “pork butt.” But none of that for TJ’s. No, they put out a multipage, two-color opus of dense text and occasional line drawings. Essays on the spice trade! Treatises on meatloaf! And people read it!

Well, I do, anyway. And it works, because after I have read it, I want a lot of the things they list in it, which is the point of an advertising circular, after all. Which goes a long way towards explaining why I showed up at writing group this week with (among other things) a bottle of seven-dollar pinot noir and a log of honey-infused goat cheese. 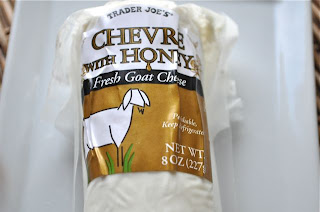 Which was every bit as tasty as promised in the flyer, consumed by the majority of the attendees (including one alleged vegan) and is now sitting in the fridge, waiting for me to come home and calling softly.