. . .As long as we file a Dance Requisition Form with the HR department, complete four hours of training and can demonstrate that the dance could not be provided by an approved minority-owned business. 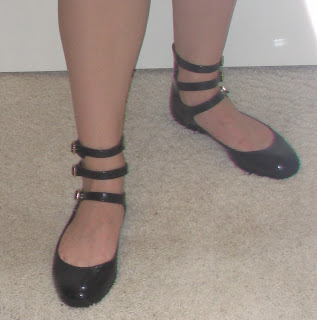 Recently, the small biotech company I had been working for was acquired by a much, much larger company, which will remain nameless because I’m not that stupid. There are a lot of benefits of working for a major multinational, such as the benefits, and the potential for job mobility, and the greatly reduced chance that I will show up at work one day and be told we’ve run out of money. So it’ got that going for it, which is nice.

But it also has a lot of bureaucracy, and a lot of lawyers, and where you have both bureaucracy and lawyers you have rules. A lot of rules. And since I work in a lab,** we have special lab rules. Like not being allowed to walk through the lab without full protective gear (gloves, glasses, labcoat), and that we can’t use 70% ethanol anymore because it’s dangerous (I wish someone had told me that at about ten-thirty, three Saturdays ago). And, most critically for me, no fabric shoes are allowed.

Which is where these come in. I mean, forget leather, what can be more safety-conscious than shoes made entirely of plastic? They even have three straps, for extra security! Okay, so breathability is kind of a problem, and the Vivienne Westwood aspect may make them slightly inappropriate. But whatever; nobody’s told me any rules about wearing sexy shoes in the lab.

*It’s a safety dance!
**Most dangerous thing I deal with regularly: deionized water.***
***Okay, sometimes hydrochloric acid. But not that much.****
****And I guess the e. coli would be bad for me if I actually ate a bunch of it, but I’m not exactly inclined to do that.