Even for professionals, the world of fashion can be confusing sometimes. For example, recently a trend for “bib necklaces” cropped up, and has been doing brisk business among people who, when they wear a necklace, have no interest in doing the thing halfway. They vary from the cute to the ridiculous, but they do have one thing in common: They are all clearly necklaces. However, this: 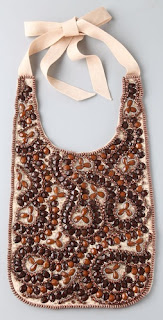 Is not a bib necklace. This is an actual bib that has been attacked by someone with a bead store, a glue gun and no taste whatsoever*; the sort of thing that a person without a clear idea of how babies work would put on one for a dinner out because it matches their purse. If you wore it, you would look like, well, you would look like this model, only not as happy because you wouldn’t be getting paid for it.

On the plus side, if one of your dining companions became enraged at your ridiculous devotion to overpriced trendy junk and tried to stab you with a fork, you would probably be safe.

*I think I just came up with my idea for an Etsy store.