It’s like being a corporate shill without all that annoying money!

As an international supermodel* and renowned beauty expert,** I am often asked what products I favor.*** So I thought I would say you all some trouble and tell you about this one before you tired yourselves out asking. 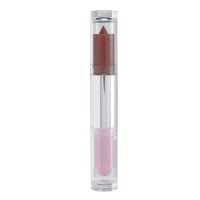 What is it? Basically it’s a two-ended eyeshadow stick, with a paler base color on one side and a darker accent color on the other. It’s easy to use and the colors come pre-coordinated for your convenience, which is handy for someone who would have flunked out of freshman art***** if art teachers held with any bourgeois notions like grading. There are detailed instructions for the titular****** eye on the back of the package, but I throw those out, since I’ve ripped them trying to get it open anyway and besides, they’re too complicated. Instead, I just slap the base coat over as much area as I feel like covering and smudge the darker color near the lashline; exactly the same way I have been applying eye makeup since the nice lady at Sephora managed to restrain her laughter at the fact that I had made it into my twenties without any clear idea of what makeup was for long enough to explain the basics to me and sell me a bunch of stuff.

So, in summary: easy to use, nice colors, cheap, not a model, also not artistic, late to the party on the makeup thing, summary, footnotes. I think that pretty much covers it.