And if not, it’s right up there.

I think I mentioned that the cruise that Cameron and I went on last month was a little on the rainy side. Which hardly ruined it, but it did limit us from participating in some of the more standard cruise activities, like sitting out in the sun and trying to avoid being dragged into “hilarious” on-deck activities. And since the room we had was very nice and quite comfortable, with an interesting if rather eccentric selection of TV channels, we ended up spending some of our time just hanging out there. Which is how we happened to come across this documentary, about Ruth Berg, the creator and star of a seminal radio play and sitcom I had never heard of, called The Goldbergs. Which was all very interesting in and of itself, but what really stuck with me was the mention of the fact that she had written and published a cookbook, purportedly by her character, Molly Goldberg, and I ended up wondering how I could find a copy of it. I figured it would take a hunt on Ebay, or at least through some possibly sketchy Amazon reseller, but no, as a matter of fact, it’s still in print. 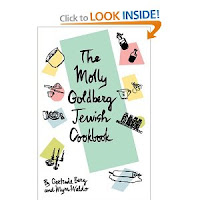 I’m going to get a copy as soon as I have enough items for free shipping.