Way back, lost now in the mists of blog, I was on a mission to find the best tempura in San Mateo. I was thorough, nearly exhaustive, but though I had some decent examples of the dish, nothing rose to the level of the tempura of my dreams. Which was a disappointment, if not really the kind that kept me up at night. But it turns out that great tempura, like love or ants, turns up when you least expect it. 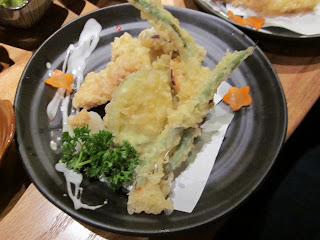 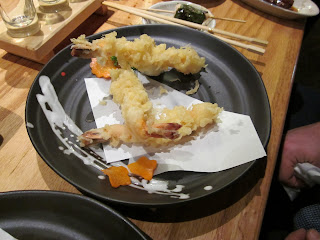 Last year a new Japanese restaurant, Izakaya Ginji, opened in downtown San Mateo. Which was a bold move, considering how many Japanese restaurants are already here, but this one did at least promise something different. Izakaya is, as far as I can tell, a small-plates style of restaurant, with an emphasis on things to be eaten with sake, beer, and/or shochu. This one features a  very large, very hot grill at the bar, where a chef prepare a variety of things, mostly chicken, on sticks, which you order from a slip of paper on your table. We had been there several times, ordering mostly the things on sticks (I cannot recommend the chicken hearts highly enough), when at one point we decided to try something more substantial, and got the tempura.

They do the vegetables and the shrimp separately, hence the two plates above. But the important thing is that they do them very, very well. Light, crisp batter, perfectly cooked ingredients, nothing that got heavy or soggy, even as they cooled. This was the tempura I was looking for, and no old guy waving his hand in my face was going to convince me otherwise.

We will go back, of course, but I may not actually order the tempura every time. It’s enough just to know it’s there.