In my last post before the holidays I mentioned that I had fulfilled a life-long* ambition and joined a cheese-of-the-month-club, with shipments to begin shortly. 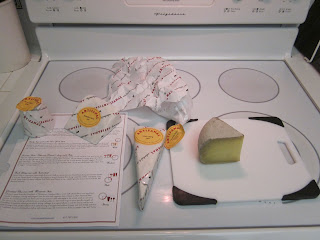 This is the December shipment– four cheeses of varying hardnesses and intensities and a handy tasting sheet so you know which is which and what to drink with it. For whatever reason I decided to start with the second one on the intensity chart: 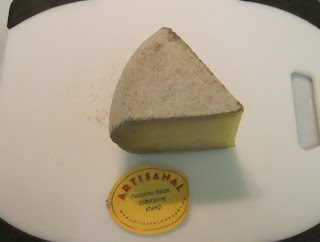 According to the Handy Sheet of Paper (HSoP), it is a raw sheep’s milk pecorino, made with a wild artichoke vegetable rennet, with its rind covered in wood ash. Which probably combine to explain a flavor to the cheese I could best describe as “green,” not in terms of age or maturity but more along the lines of tasting like vegetation. Still very tasty, but I think it’s telling that this is the only one of the cheeses that we didn’t entirely finish.**

Also, that ash on the rind gets everywhere.

*At least, for the part of my life when I knew that cheese-of-the-month-clubs existed.
**We did come pretty close.