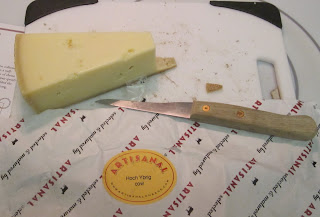 The tasting notes say “washed in white wine brine, aged by ‘master affineur Rolf Beeler near Zurich.'” I say “Raclette!” because that’s what it tasted like.

Thanks to my mom’s Swiss heritage, we would have raclette occasionally when I was growing up, cooked on a lethal-looking contraption that melted the entire side of a quarter-wedge of cheese with an exposed heating element that is probably the reason they don’t sell them here anymore. (Although a similar item does seem to be available from Europe.) It’s a wonderful thing– who doesn’t enjoy a dinner of melted cheese?– but the downside was that just when the melting process really got going was about the time when everyone was too full to eat another bite. Which is part of the reason these newfangled models are less fun; there’s nothing Swiss about portion control. Also: no giant cheese wedge.

I wonder if there’s such a thing as a Giant Cheese Wedge of the Month club?