Tell Me What You Eat and I’ll Tell You That It’s Cheese. 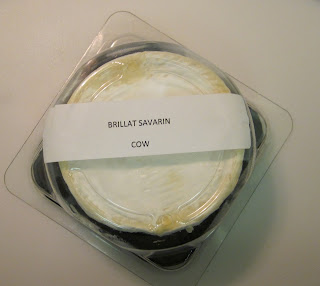 I’m not sure if I should be feeling pleased with myself or cheated, but I’ve had this cheese before. It showed up on a cheese plate at a restaurant a few years ago, and I liked it enough to remember the name and find it in the store. Actually, remembering the name was the easy part, because I was already familiar with it. Brillat Savarin was a French lawyer, essayist and gastronome and, more to the point, he was prominently quoted in the opening of every episode of the original, Japanese, Iron Chef, with which I developed a long-running and only somewhat ironic obsession with in the early 2000s*. I even threw an Iron-Chef-themed party at one point, during which I burned my hand trying to cook satay on the barbecue grill.

Which brings me to the really important news: Don’t tell the cable company, but we have somehow gotten a free upgrade to the better cable package, which includes, among other things, The Cooking Channel, which appears to be basically the Food Network before they discovered reality shows and they show the old Iron Chef episodes. So I am reintroducing myself to those simpler times, not to mention the wide wonderful world of premium cable that has suddenly become available.**

Oh, and also we had some cheese. I recommend it.

*It is one of the great failures of our times that we never managed to come up with a decent nickname for that decade.
**BBCAmerica! Which shows Star Trek: The Next Generation reruns in primetime for some reason! But also Top Gear, so all is forgiven.