When coming up with adjectives to describe spring in Arizona, “Canadian” is not the first thing that springs to mind. It comes in well behind “dry,” “hot,””arid,” “baseball-y” and “sere.” But evidence of the presence and cultural impact of our neighbors to (or, in this case, from) the North, from the guys sitting behind us at the baseball game who actually punctuated their statements with the occasional “eh?” and the appearance, in the aggressively Olde Western downtown Scottsdale, of a place selling shwarma*, to this sign: 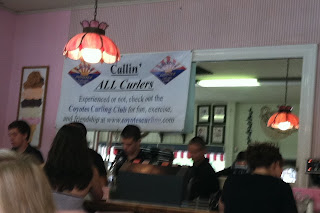 Curling in Phoenix! Phoenix, where ice doesn’t even bother melting, it just gives you a sad, defeated sigh and vanishes.

Of course, Canada isn’t the only place where people in Arizona are from. Being from other places is a major pastime in the greater Phoenix area, which is why dinner on Friday night consisted of some excellent and authentic New York style pizza, from a pizzeria with its primary outlet (and many of its customers) from Brooklyn. And, as the cooking staff there demonstrated, it’s easy to forget that America’s other NAFTA partner makes by far the largest contribution to the local culture and economy. But I think Canada may still have the edge. After all, plenty of other places have sent their people to The Grand Canyon State, but how many have actually relocated their educational institutions? 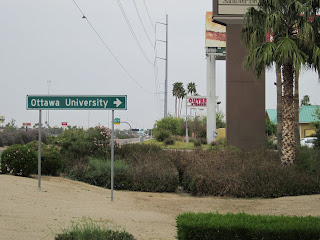 *Not technically native to Canada, but so beloved in its cities that people who have moved away speak of it longingly for years since, even if they have moved to a place with excellent and plentiful Mexican food.