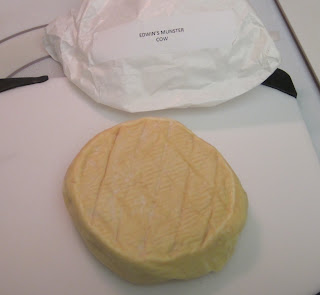 In the life of every cheese lover there comes a Moment.* That magical point in time when you are faced with the cheese that will test your resolve, that will prove whether you are a true connoisseur or merely a Velveeta-eater with pretensions. In that moment, the truth of your desire to consume and enjoy the cheeses of the world is laid bare.

Friends, I have looked into the Heart of Cheese, and I blinked.

It did not begin well. As soon as I opened the shipping box, before I even took any of the cheeses out of their wrappers, I could already begin to smell it. If I had just received a package of normal food that smelled like that, I would have sent it straight back with an angry note and probably complained about it on Twitter, but cheese isn’t like that. Sometimes, cheese smells, I reasoned. This must be one of those times.

So I unwrapped the cheese and took my picture, and the smell grew steadily stronger. It was a horrible, sour, rotten smell, a stink that could wake the dead, and make them say thanks anyway, we’d rather be dead. But still, I held out hope. After all, it could turn out to be like durian, the famously foul-smelling Asian fruit that actually has a surprisingly mild taste**. Maybe the cheese wouldn’t taste as bad as it smelled.

And the truth was, it didn’t. It tasted worse. I don’t know exactly how to describe the flavor, except to say that this was one of those times when it was really very clear to me that what cheese is is, essentially, milk that has been allowed to spoil so completely that it turns into a semi-solid, runny, lump. My taste buds, under the influence of hundreds of generations of selective pressure not to let me eat something that was clearly going to kill me, reacted violently. Even Cameron, who regularly eats kimchi straight out of the jar, almost spit it out.

I have faith in Artisanal, my cheese club source, that they are only sending me the best examples of the kind. I am sure that there are cheese-lovers in the world who would have clapped their hands in glee upon being presented with a Munster of this quality. But, dear readers, I am forced to admit that after that one small taste, I took that cheese straight to the trash and threw it in.

And then I took the bag out to the garbage chute before it stank up the whole apartment.

*At least, I assume there does. Maybe it’s just me.
**A little like strawberry, with a touch of gas leak on the finish.