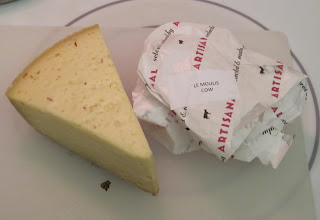 Well, after that last little cheese meltdown* I think we’d better take it easy with this one. And brief, because there just isn’t much to say, aside from that it is a nice cheese. Nice and mild, nice nutty finish, nice smell. It had small, evenly-sized air pockets spread evenly through it, which were nice enough, I guess, assuming they were meant to be there. You could serve this at a party and people would say, “Hm, that’s a nice cheese.” And you would say, “It is isn’t it?” and then you could go back to talking about how you kind of miss American Idol since you stopped watching it, but not enough to spend your time actually listening to Steven Tyler talk, and they would agree, and point out that J.Lo isn’t exactly one of the great thinkers of the age either.

See? That was much better.

*There’s some kind of fondue-based pun to make there, I just know there is.