Potential new semi-regular feature here, where I demonstrate recipes so foolproof that even I can’t screw them up, though not for a lack of trying. Today we’re starting with one of my more elaborate attempts: making choucroute garni. Or, as it has come to be known around here, “the big pile of pork” dish. It works as both a hearty dinner and an air freshener, as long as you like your fresh air to smell like cooked pork, amd it’s so easy to make that at times it can seem like it would be harder not to make it. Here, then, are the steps:

Step 1:*
Get some potatoes and peel them. I used Yukon golds because I like them as chips. 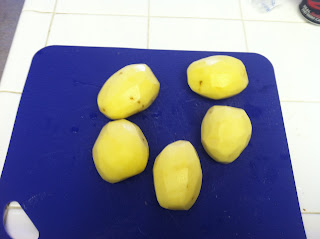 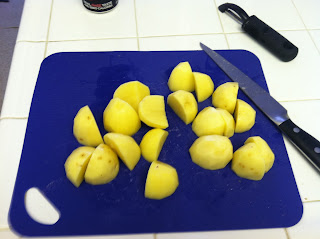 Step 3:
Acquire enough cured pork products that you could, if necessary, reconstruct a small pig. 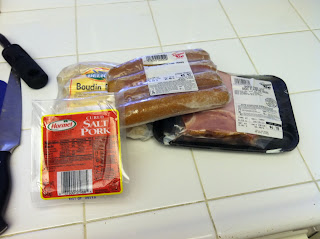 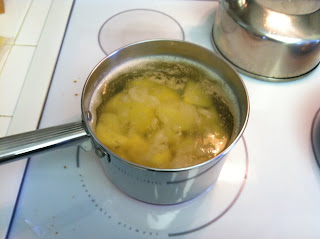 Step 5:
Brown the salt pork in a smallish pan. 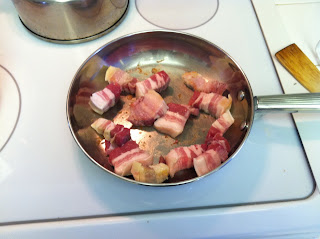 Step 6:
Roughly chop a large sweet onion (not shown) and add it to the pan you have just taken the browned salt pork out of. Realize that the pan is too small for the amount of onions you have; decide there isn’t anything you can do about it at this point. 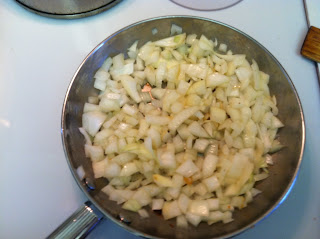 Step 7:
Own a crock pot. Inherit one if possible, so you can avoid modern annoyances like grounded plugs. 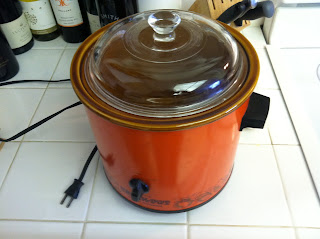 Step 8:
Start layering the ingredients in the crock pot. This is the bottom layer of a one-pound bag of sauerkraut, some of the potatoes, some of the onions and some of the salt pork. 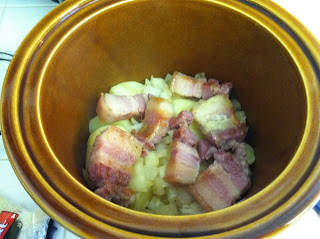 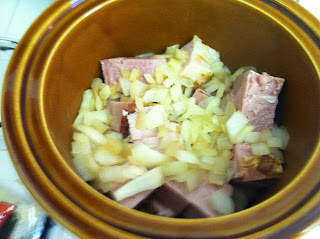 Step 10:
The recipe calls for adding juniper berries, but since I don’t know where to buy them, or what I would do with the rest of an entire package of juniper berries when I only make this a couple of times a year, I just go ahead and use a couple splashes of gin. 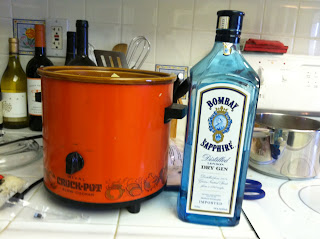 Step 11:
Pile in the rest of the pork and potatoes. Realize there is not enough space in the crock pot for all the ingredients you bought. Push them down a bit to make room. 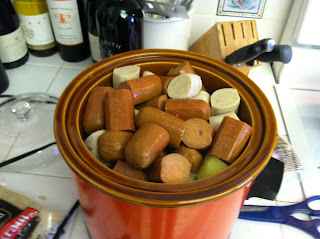 Step 12:
Layer the other one-pound bag of sauerkraut on top. Try not to let it overflow too much. 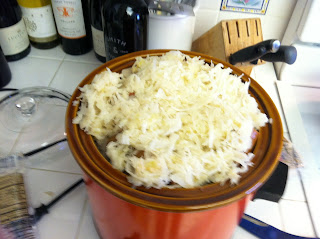 Step 13:
Add as much cheap white wine as you can fit in the space in the pot. 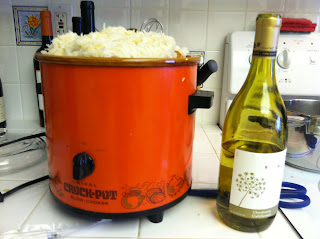 Step 14:
Plug in and let cook. Go to the gym for an extended workout 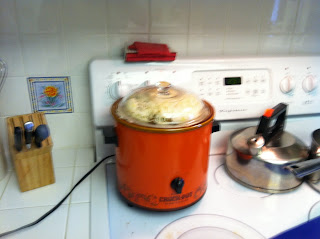 Step 15:
While you are gone, have your companion notice that despite the fact it has been plugged in for three hours, the pot is not actually in any way hot. Learn when you get back that the reset button on the outlet needed to be pushed, which could only be accomplished by the use of significant force and a pair of kitchen scissors. Thank him, reschedule your timing for dinner.

Step 16:
Regularly mop up the overflow from the pot. Note that, before they cook down, some things seem to need to cook up. 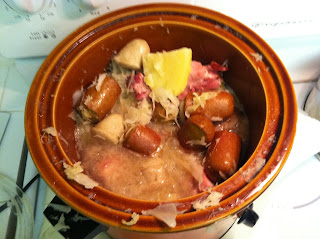 Step 18:
Store remainder for later use. 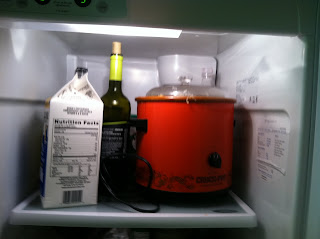 *Anyone caught singing a New Kids on the Block song will be immediately sent to the back of the class. Mary.
**Some of these early steps are not strictly in order. You could easily deal with the pork before the potatoes, for example. But you do need to peel the potatoes before you boil them.

1 thought on “Sunday Dinner: An Adventure in Pictures”