It has recently come to the world’s attention* that Food Network is planning to debut a new show, hosted by Rachael Ray and Guy Fieri, in which D-H level celebrities compete to see who can get the most screen time while preparing food. Naturally, you have some questions that need to be answered, and that’s what I’m here for.**

Q: A show that combines the premises of “Dancing with the Stars” and “Top Chef?” Why hasn’t this been made before now?
A: We believe that the program was actually created in 2007 and was accidentally transported to our time when someone dropped a sandwich on the Large Hadron Collider. The downside is that we think the Higgs boson went the other way, and now has a development deal with SoapNet.

Q: Could you use a photo of the hosts to illustrate every element a woman should avoid when choosing a pair of jeans?
A: 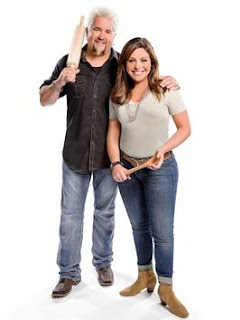 Q: What percentage of the contestants use the word “international” in their bios?
A: 50%

Q: In what percentage of the countries of the world, on average, would these “celebrities” be recognized?
A: 0.006%

Q: Is Coolio involved?
A: Of course.

Q: What is the predicted number of “munchies” jokes that will be made relating to Cheech Marin’s presence, in the premier alone?
A: Our statisticians attempted to answer this question, but were forced to suspend their calculations when the computer they were using became suicidal.

Q: Which of the contenders includes in her bio the least impressive blow for gender equality ever made?
A: That would be onetime-Olympian-who-no-one-has-really heard of Summer Sanders, for this gem: “…becoming the first female game-show host on Nickelodeon by hosting Figure It Out…”

Q: How many of the contestants have starred in a direct-to-video movie about killer mutant bats?
A: One.

Q: Do any of the “charities” supported by the contestants seem to be transparent attempts by a once-famous performer to supplement his income?
A: “Joey Fatone will be playing for the Fatone Family Foundation. “All the money that we gather from different events and stuff that we do throughout the year we distribute to different children’s charities.””

Q: He could actually be giving the money away.
A: True.

Q: But it does kind of sound like the “charity” is just his name on a bank account.
A: Charity begins at home.

Q: Is there now or has there ever been a human being more annoying than Guy Fieri?
A: Hard to say.