(One of my resolutions for this year is to post on this blog more often. Also, no drinking on weeknights.)

This week in last month’s news: We bought a house! It is lovely and very large. I feel a bit weird posting pictures of the front of it online*, but here’s a shot of the staircase. 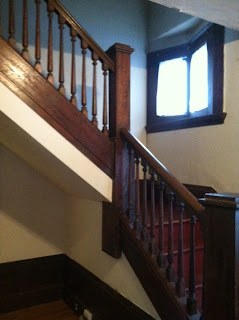 But more on that later.** Right now I want to talk gardening. Longtime readers*** may recall that I have an enthusiastic but spotty history of growing things, particularly tomatoes. But one of the things that came with our house was a big, sunny, south-facing backyard, with enough space to grow almost anything we want, just as soon as we have to soil tested to make sure it isn’t too contaminated with the lead paint that’s been flaking off the house since 1905.

In the meantime, let’s start some sprouts:

We really should have started most of these last fall, for a winter crop, but we didn’t actually, technically own the house then, and that might have presented some problems.

The above picture is from Day 0, when we planted everything but the legumes. (It was taken in the sunroom, planned future home of tomatoes and peppers, because it gets really hot in there.) How have they progressed since then? So glad you asked: 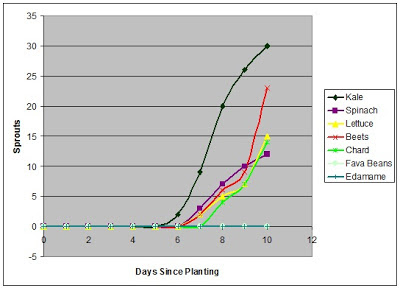 I think it’s going rather well.

3 thoughts on “The Garden Plot”